In 1847, Robin and Ben's great, great, uncle set up A. Mathews and Skailes: a London-based company that supplied cheese, eggs, butter and other provisions. 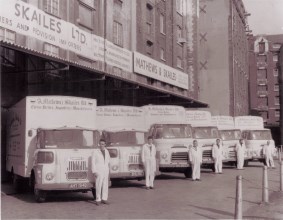 During the 1920s, Robin and Ben's grandfather, Frank, joined the family business. In 1941, wartime regulations required Frank Skailes to operate the cheese-making side of the business through a separate company. So Somerset Creameries was born - a Somerset-based company that also operated a Stilton dairy in Melton Mowbray.

In 1949 Somerset Creameries acquired Cropwell Bishop Creamery and expanded its product range to include cheeses such as Cheddar, Red Leicester and Double Gloucester.

In 1973, Frank Skailes sold A. Mathews and Skailes, moved Somerset Creameries to Cropwell Bishop and closed down its West Country operations.

In 1981, David and Ian Skailes took the helm from their father, and became the joint managing directors of Somerset Creameries. A few years later they sold North Street Dairy in Melton Mowbray and invested the funds into Cropwell Bishop to make it the world-class dairy it is today.

David's son, Ben, started working for the company in 2004, followed two years later by his cousin, Robin. In 2005 Somerset Creameries became known as Cropwell Bishop Creamery, and a year later the company built a packing and distribution site on the outskirts of the village.

Robin and Ben now manage the running of the creamery under the watchful eye of their fathers, who remain closely involved in the business.