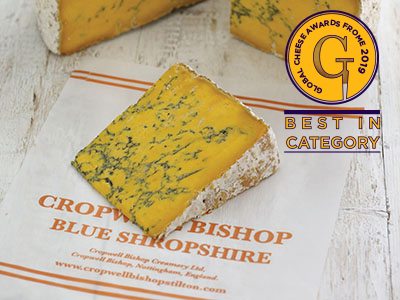 Cropwell Bishop Creamery has had a busy and successful year with our cheeses continuing to achieve at all the major Awards Shows, adding an encouraging number of awards to the Creamery’s trophy cabinet.

As well as retaining the Cooper Thornhill trophy for our classic Blue Stilton at the International Cheese Awards, we were delighted to be judged Best in Category for our Blue Shropshire at the Global Cheese Awards. A consistent achiever, our Blue Shropshire was granted two stars in the prestigious Great Taste Awards and has just finished the Awards season with a silver award in the World Cheese Awards. Described as ‘handsome’ and ‘striking’, this creamy, deep-orange coloured cheese has gained a major award in every one of the last five years.

Top marks went to our deliciously soft, melt-in-the-mouth Beauvale. Securing the highest achievement of three stars in the Great Taste Awards, judges described it as ‘velvety, smooth and tangy’. Most recently, it was Highly Commended in the Great British Food Awards, described by judge Marcus Wareing as ‘very good’. He said, “it had a creaminess to it that rounded out the acidity very well and the saltiness was spot on.” We rarely meet anyone who isn’t seduced by Beauvale.

Our Organic Blue Stilton has also attracted awards in the major shows this year and was a finalist in the influential BOOM (Best of Organic Market) Awards, run by the Soil Association.

You can buy all of our award-winning cheeses from our online shop.